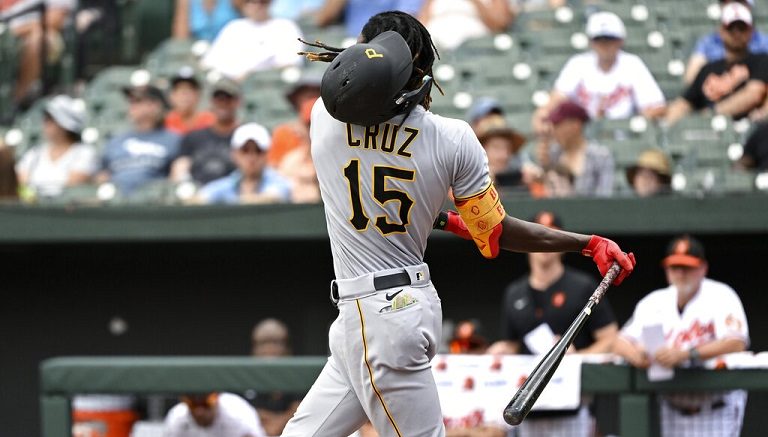 Pittsburgh Pirates' Oneil Cruz (15) swings out of his helmet on a ball thrown by Baltimore Orioles starting pitcher Spenser Watkins during the second inning of a baseball game Sunday, Aug 7, 2022, in Baltimore. (AP)

The Pirates also ended their own nine-game skid at Camden Yards, improving to 2-11 at the ballpark. Wilson (2-6) allowed a run and four hits in five-plus innings, and Pittsburgh broke the game open in the seventh after a replay review changed a call at the plate.

Pittsburgh’s Greg Allen initially was called out, but upon review, catcher Robinson Chirinos was ruled to have violated the home plate collision rule, and Allen was called safe.

“The catcher’s initial setup completely in foul territory was illegal and he maintained that position without possession of the ball,” Major League Baseball said in a statement.

Pirates manager Derek Shelton said it was an easy decision to challenge the play.

“That’s probably about as confident as I’ve been on any challenge we’ve done,” Shelton said. “We didn’t even go to the phone.”

Orioles manager Brandon Hyde was ejected after the call was overturned.

“I thought that Chirinos was in a good spot,” Hyde said. “Looking at the replay, too, it felt like his right foot was on the line, or on the foul side of the line, giving the runner a clear lane. The ball beat him.

That run gave Pittsburgh a 5-1 lead. The ruling also kept the Pirates’ rally going after what would have been the third out of the inning. Bryan Reynolds followed with an RBI single, and Hayes hit a two-run homer.

Baltimore’s Spenser Watkins (4-2) retired his first 13 hitters before allowing four straight singles in the fifth. Pittsburgh scored three runs that inning, taking the lead after Jorge Mateo of the Orioles homered in the third.

The Orioles entered the day just a game out of the final wild card in the American League. Now they begin a big stretch in which 16 of their next 17 games are against the Blue Jays, Red Sox, Rays and White Sox — teams also in postseason contention in the AL.

Michael Chavis had an infield single for the Pirates for their first baserunner against Watkins. Bligh Madris singled and Allen drove home Chavis with a single. An RBI single by Cal Mitchell made it 2-1, and José Godoy drove in a run with a groundball.

Chavis added an RBI single in the sixth. Watkins allowed four runs on four hits and a walk in 5 1/3 innings.

Pirates: Godoy, the catcher, left in the sixth because of cramping and heat-related issues. Shelton said afterward Godoy was fine.

Orioles: OF Austin Hays (side) missed his fourth straight game.

Baltimore opens a three-game series against Toronto, sending Jordan Lyles (8-8) to the mound against Yusei Kikuchi (4-5) on Monday night.

The Pirates start Tyler Beede (1-1) in the opener of their four-game set at Arizona.