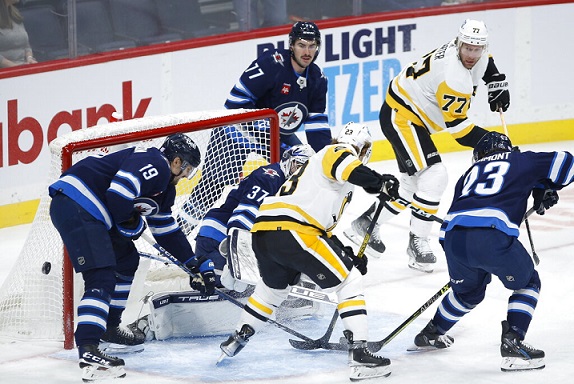 WINNIPEG, Manitoba (AP) — Tristan Jarry stopped all 32 shots he faced for his 12th career shutout, and the Pittsburgh Penguins beat the Winnipeg Jets 3-0 on Saturday night.

Bryan Rust had a goal and an assist, Jason Zucker and Jake Guentzel also scored, and Sidney Crosby had two assists for Pittsburgh. The Penguins won for the third time in five games (3-1-1) after losing seven straight (0-6-1).

Jarry had 13 saves in the first period, 10 in the second and nine in the third to get his first shutout of the season.

“It’s always nice when you don’t let anything in,” said Jarry, who had been battling an undisclosed injury recently. “I thought the guys did a great job there, boxing out early, and it allowed me to see a lot of pucks. I was seeing tips and played well positionally.”

Penguins coach Mike Sullivan liked what he saw from his goalie.

“I just thought he was tracking the puck and he was in control,” Sullivan said. “He was big and I thought he made good decisions on exchanges with our defensemen. I liked everything about his game.”

Connor Hellebuyck stopped 31 shots for Winnipeg, which lost for the third time in 11 games (8-2-1).

The game was scoreless until Zucker took a pass from Evgeni Malkin and beat Hellebuyck over his shoulder 53 seconds into the third period.

“They got the lead early in the third and did a pretty good job of breaking it out and being tough to get through in the neutral zone,” Jets defenseman Josh Morrissey said. “Both goalies played well, and it probably could have went either way for a lot of the game.”

Rust doubled the lead after Hellebuyck surrendered the puck to Sidney Crosby, who promptly set up Rust and the right wing capitalized to make it 2-0 with 1:34 left.

Rust was all praises for Jarry.

“(He) was awesome,” Rust said. “Jarry has been an awesome goalie for us for a very long time. He made very key saves for us tonight.”

The Jets held a 23-22 shot advantage through the first 40 minutes as both goalies held down their respective forts. Hellebuyck made a solid save on Pittsburgh’s Ryan Poehling in addition to some quick stops on screened shots.

Morrissey and Cole Perfetti both came close to scoring for Winnipeg during a pair of power plays in the second, but were stoned by Jarry.

“(Jarry) played great, obviously made some big saves,” Morrissey said. “Helly played great as well. … You’d like to get your goalie some offence when he’s playing that well. We have to figure out what we can do better and be ready for Monday.”

Hellebuyck was forced to be sharp facing dangerous shots from Guentzel, Kris Letang, Malkin and Rickard Rakell in the first period. Hellebuyck also stopped Crosby on a partial breakaway after the star took the puck away from Morrissey.

The Jets announced that veteran forward Nikolaj Ehlers is scheduled for a hernia operation and will be out of action. Ehlers, who only played two games this year, is the third forward that Winnipeg has lost to injury this season. The others are Mason Appleton and Morgan Barron, both with wrist injuries. … Jets defenseman Dylan DeMelo missed his second straight game with an upper-body injury. Veteran Kyle Capobianco replaced him again. Defenseman Ville Heinola, who was recently recalled from Manitoba of the AHL, sat out for the second straight game. DeMelo is expected to return on Monday.

Penguins: At Chicago on Sunday night to wrap up a three-game trip.