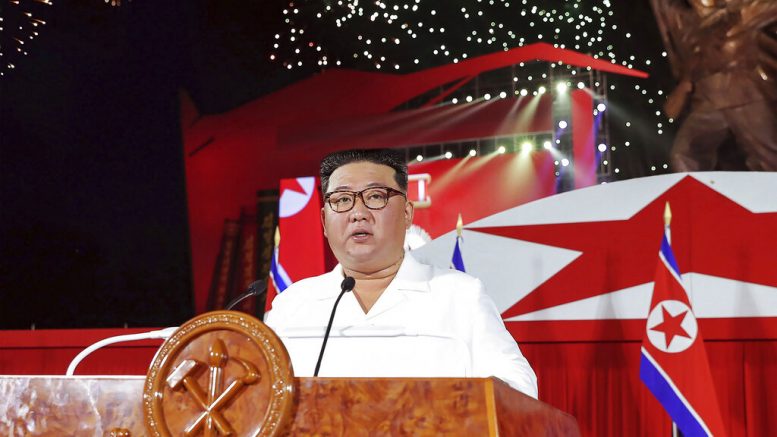 In this photo provided by the North Korean government, North Korean leader Kim Jong Un delivers his speech during a ceremony to mark the 69th anniversary of the signing of the ceasefire armistice that ended the fighting in the Korean War, in Pyongyang, North Korea, on Wednesday, July 27, 2022. (AP)

SEOUL, South Korea (AP) — North Korean leader Kim Jong Un warned he’s ready to use his nuclear weapons in potential military conflicts with the United States and South Korea, state media said Thursday, as he unleashed fiery rhetoric against rivals he says are pushing the Korean Peninsula to the brink of war.

Kim’s speech to war veterans on the 69th anniversary of the end of the 1950-53 Korean War was apparently meant to boost internal unity in the impoverished country amid pandemic-related economic difficulties. While Kim has increasingly threatened his rivals with nuclear weapons, it’s unlikely that he would use them first against the superior militaries of the U.S. and its allies, observers say.

“Our armed forces are completely prepared to respond to any crisis, and our country’s nuclear war deterrent is also ready to mobilize its absolute power dutifully, exactly and swiftly in accordance with its mission,” Kim said in Wednesday’s speech, according to the official Korean Central News Agency.

He accused the United States of “demonizing” North Korea to justify its hostile policies. Kim said regular U.S.-South Korea military drills that he claimed target the North highlight U.S. “double standards” and “gangster-like” aspects because it brands North Korea’s routine military activities — an apparent reference to its missile tests — as provocations or threats.

Kim also alleged the new South Korean government of President Yoon Suk Yeol is led by “confrontation maniacs” and “gangsters” who have gone further than previous South Korean conservative governments. Since taking office in May, the Yoon government has moved to strengthen Seoul’s military alliance with the United States and bolster its own capacity to neutralize North Korean nuclear threats including a preemptive strike capability.

“Talking about military action against our nation, which possesses absolute weapons that they fear the most, is preposterous and is very dangerous suicidal action,” Kim said. “Such a dangerous attempt will be immediately punished by our powerful strength and the Yoon Suk Yeol government and his military will be annihilated.”

South Korea expressed “deep regret” over Kim’s threat and said it maintains a readiness to cope with any provocation by North Korea in “a powerful, effective manner.”

In a statement read by spokesperson Kang In-sun, Yoon’s presidential national security office said South Korea will safeguard its national security and citizens’ safety based on a solid alliance with the United States. It urged North Korea to return to talks to take steps toward denuclearization.

In April, Kim said North Korea could preemptively use nuclear weapons if threatened, saying they would “never be confined to the single mission of war deterrent.” Kim’s military has also test-launched nuclear-capable missiles that place both the U.S. mainland and South Korea within striking distance. U.S. and South Korean officials have repeatedly said in the past few months that North Korea is ready to conduct its first nuclear test in five years.

Kim is seeking greater public support as his country’s economy has been battered by pandemic-related border shutdowns, U.S.-led sanctions and his own mismanagement. In May, North Korea also admitted to its first COVID-19 outbreak, though the scale of illness and death is widely disputed in a country that lacks the modern medical capacity to handle it.

“Kim’s rhetoric inflates external threats to justify his militarily focused and economically struggling regime,” said Leif-Eric Easley, a professor at Ewha University in Seoul. “North Korea’s nuclear and missile programs are in violation of international law, but Kim tries to depict his destabilizing arms buildup as a righteous effort at self-defense.”

Experts say North Korea will likely intensify its threats against the U.S. and South Korea as the allies prepare to expand summertime exercises. In recent years, the South Korean and U.S. militaries have canceled or downsized some of their regular exercises due to concerns about COVID-19 and to support now-stalled U.S.-led diplomacy aimed at convincing North Korea to give up its nuclear program in return for economic and political benefits.

During Wednesday’s speech, Kim said his government recently set tasks to improve its military capability more speedily to respond to military pressure campaigns by its enemies, suggesting that he intends to go ahead with an expected nuclear test.

But Cheong Seong-Chang at the private Sejong Institute in South Korea said North Korea won’t likely conduct its nuclear test before China, its major ally and biggest aid benefactor, holds its Communist Party convention in the autumn. He said China worries that a North Korean nuclear test could give the United States a justification to boost its security partnerships with its allies that it could use to check Chinese influence in the region.

North Korea recently said it is moving to overcome the COVID-19 outbreak amid plummeting fever cases, but experts say it’s unclear if the country can lift its strict restrictions soon because it could face a viral resurgence later this year. During Wednesday’s event, Kim, veterans and others didn’t wear masks, state media photos showed. On Thursday, North Korea reported 11 fever cases, a huge drop from the peak of about 400,000 a day in May.

North Korea has rejected U.S. and South Korean offers for medical relief items. It has also said it won’t return to talks with the United States unless it first abandons its hostile polices on the North, in an apparent reference to U.S.-led sanctions and U.S.-South Korean military drills.