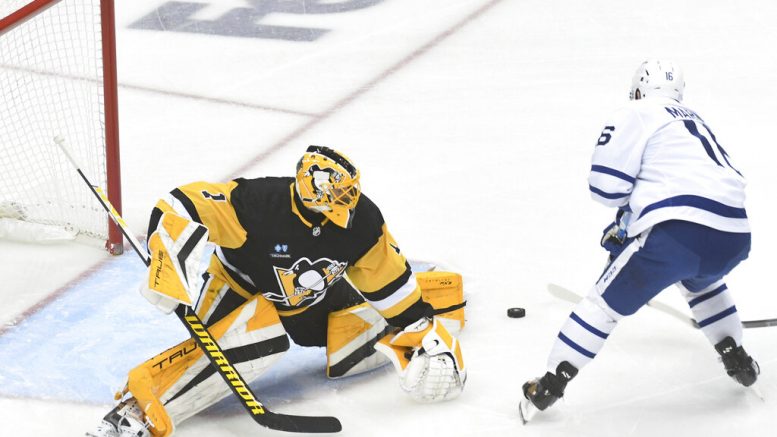 PITTSBURGH (AP) — Mitch Marner extended his point streak to 16 games with a goal and an assist, and the Toronto Maple Leafs beat the Pittsburgh Penguins 4-1 on Saturday night.

Auston Matthews became the seventh player in team history with 200 career even-strength goals, William Nylander scored his 12th of the season and Pontus Holmberg his second for the Maple Leafs, who have points in eight straight games and 14 of their last 16 overall. Marner’s goal was his sixth of the season.

“(Marner’s) just really leading the way for us,” Maple Leafs coach Sheldon Keefe said. “Clearly, he’s found his game. In all regards, he’s been a difference-maker for us.”

Toronto has won three straight games and nine of its last 13 overall. The Maple Leafs are 5-0 on the road in November.

The Maple Leafs are missing four regulars on defense, including top defenseman Morgan Rielly, but they held a 41-26 advantage in shots. Erik Kallgren made 25 saves for his third win of the season.

“I think we’re playing really confident and very solid defensively,” Kallgren said. “I don’t know if (Pittsburgh) had any odd-man rushes and I saw a lot of pucks from the top.”

“We got outplayed,” Penguins coach Mike Sullivan said. “You have to give Toronto credit. I thought Toronto played hard, they defended hard and made us work for our offense. I thought we gave them some easy looks.”

None easier than the first minute of the game. Marner needed 40 seconds to extend his point streak after he caught Pittsburgh in a bad line change and beat DeSmith on a breakaway. Marner has factored in Toronto’s first goal in each of the team’s last six games. Toronto is 7-3-2 when it scores first.

“Your eyes get big anytime you’re one-on-one with the goalie,” Marner said. “I tried to go in there, freeze him and take it to the far side and luckily it worked.”

Toronto dominated play and outshot Pittsburgh 24-6 at one point, yet still held a 1-0 lead. Pittsburgh appeared to tie the game at 7:58 of the second when the puck squeezed through Kallgren’s equipment. Rakell battled behind Kallgren to backhand a shot across the line, but the play was deemed dead when the referee lost sight of the puck, and the goal was waived off.

“Obviously, the puck is loose and the referees didn’t see it,” Sullivan said. “You’d hope they see it and not blow the whistle, but that’s their call. If they don’t see it, they have to blow the whistle and that’s how it was.”

Less than two minutes later, Holmberg gave the Maple Leafs a 2-0 lead with a wrist shot from the slot to the glove side. Nylander scored from the top of the crease 55 seconds later, increasing the lead to three goals.

Nylander scored his 149th career goal, surpassing Hockey Hall of Famer Borje Salming for second-most by a Swedish player in Maple Leafs’ history. Salming, who was living with ALS, or Lou Gehrig’s disease, died Thursday at 71.

Marner has five goals and 22 points during his 16-game run.