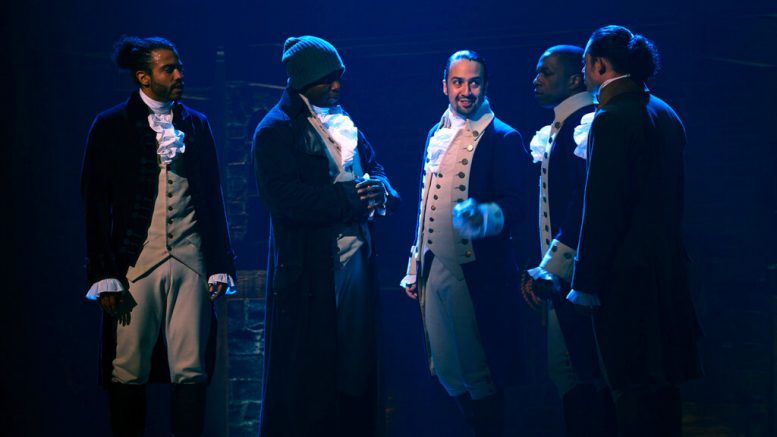 In this image released by Disney Plus, from left, Daveed Diggs, Okieriete Onaodowan, Lin-Manuel Miranda, Leslie Odom Jr. and Anthony Ramos appear in a filmed version of the original Broadway production of "Hamilton." (AP)

The revolution is finally being televised, thank goodness.

The long-awaited live-capture of Lin-Manuel Miranda’s shake-the-rafters musical “Hamilton” comes out Friday on Disney+, a chance to celebrate America’s independence with some of its Founding Fathers.

The timing seems ideal. Or, given all that’s shook this nation in the past few months, could it not be quite revolutionary enough?

The show features the original Broadway cast — who Miranda has called “an incredible ’28 Yankees of actors” — and was filmed in the summer of 2016 at The Richard Rodgers Theatre in front of a raucous crowd. RadicalMedia, which taped the last night of “Rent,” recorded two performances of “Hamilton” and asked actors on their days off to come back and do close-ups.

The show won 11 Tony Awards, including best new musical, best book and best score. The cast album has been a blockbuster and the show has toured to packed houses. But only in this filmed version is the original cast once again married with Andy Blankenbuehler’s choreography and Howell Binkley’s lighting design. These were all the seeds of world-conquering greatness.

Thomas Kail, who helmed the successful “Grease: Live” on Fox and won a Tony for directing “Hamilton,” directed the filmed version. Kail’s camera captures actors’ intimate faces during key moments in a way impossible for theater-goers and incorporates audience reaction to create an electric filmed version.

The musical charts the rise and fall of statesman Alexander Hamilton and stresses his orphan, immigrant roots — “Immigrants. We get the job done!” is one line that gets huge applause — as well as his almost Greek tragedy of a fall, fed by ambition.

It’s hard to underestimate how fresh “Hamilton” was just a few years ago: A reclaiming of America’s founding story by a multicultural cast using modern music, language and themes. Based on a biography by Pulitzer Prize-winning author Ron-Chernow and developed during the presidency of the first Black president, the show was optimistic and ambitious, tweaking Broadway traditions but respecting them, too. What other show would pit two Founding Fathers in a rap battle over whether to aid France?

Many in the brilliant cast were relatively unknown to the wider world when they hit the stage: Daveed Diggs, Renée Elise Goldsberry, Jonathan Groff, Christopher Jackson, Leslie Odom Jr., Okieriete Onaodowan, Anthony Ramos and Phillipa Soo. Even Miranda, who plays Hamilton and wrote the musical’s songs and story, wasn’t yet a brand name.

The music mixes R&B, hip-hop and show tunes. There are shards of songs by Gilbert & Sullivan, Grandmaster Flash, Rodgers & Hammerstein, Jason Robert Brown, DMX and the Notorious B.I.G. It riffs on Shakespeare and the Bible. It could only come from a mind as brilliant and hungry as Miranda’s.

This version reminds us of that talent but also its absence: Broadway kept being Broadway after “Hamilton” for the most part, returning often to dusty or safe shows. It turns out Miranda’s audacious step wasn’t the sharp end of the spear — it was just a glorious one-off. “Hamilton” dangled the possibility of a brilliant future and, now five years after its debut, Broadway has clearly wasted its shot.

So with theaters idle due to the pandemic, the film version’s fast-tracked streaming arrival — it was slated to hit movie theaters in October 2021 — is welcome. But a second societal spasm — the confrontation with racial injustice — makes “Hamilton” a problematic choice in the wake of George Floyd’s death.

The nation seems different from a few years ago, ready for another revolution, this time from the streets, not from the drawing rooms where it happened in the 1700s. We are reexamining our dark history and who it really holds dear. Statues are toppling, old heroes are being interrogated and past indiscretion brought into the light.

“Hamilton” — for all its progressiveness — is not immune to this reexamination. It looked at America’s past and raised its own statues. But it skirted the nation’s white supremacist origins, despite three minority actors playing white, slave-owning current or future presidents.

Thomas Jefferson is represented as the one bad Founding Father who did participate in slavery. “Your debts are paid ‘cuz you don’t pay for labor,” Hamilton teases Jefferson in a cabinet rap battle. “We know who’s really doing the planting.”

Yet George Washington’s ownership of slaves isn’t mentioned at all and Hamilton’s role as a slave owner has been whitewashed. “Hamilton” in 2020 crashes into Black Lives Matter and comes off less powerful, less revolutionary.

In the show, Miranda’s line: “Who lives, who dies, who tells your story?” was a plea to put Hamilton back into the history books, to reclaim this lost Founding Father. The genius of “Hamilton” is unchanged — how history remembers and changes.

But in 2020, the question of how we tell stories has shifted in meaning. Who tells our story? That would be white people — and the show’s lens might scramble the deck but it’s still about elite, white males. “Hamilton” once asked us to look again at the birth of America, but it’s hard not to think that it may soon face its own kind of reckoning.

It didn’t do all the work.

“Hamilton,” a Disney Plus release, is rated PG-13 for gun violence and adult themes. Running time: 161 minutes. Four stars out of four.