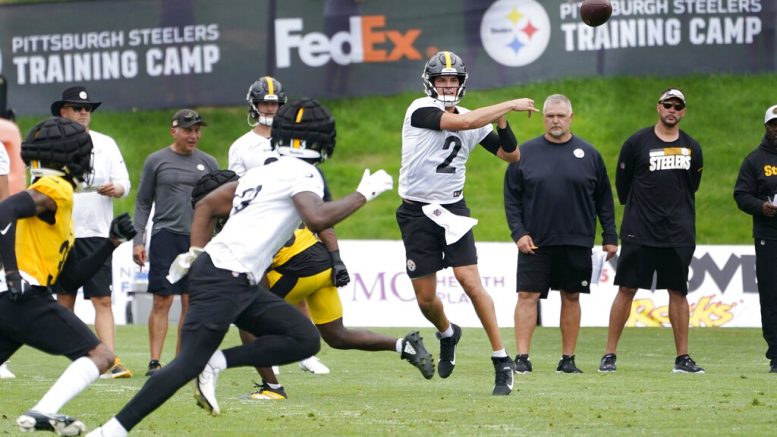 LATROBE (AP) — Mike Tomlin figures there’s already enough unspoken pressure on Mitch Trubisky, Mason Rudolph and Kenny Pickett. He sees no need to add to it. At least not yet.

It’s why the longtime Pittsburgh Steelers coach is in no rush to announce a starting quarterback. Or spend the next six weeks giving daily updates on who might be in the lead to replace the retired Ben Roethlisberger.

Tomlin knows the situation will not sort itself out on Twitter or the internet or sports talk radio or debate shows but the practice field. It’s a process Tomlin admits is equal parts scary and exciting, not just for him but the three players vying for the enviable yet daunting right to take over for a two-time Super Bowl winner likely on his way to the Hall of Fame.

It’s a lot to ask, which is why Tomlin isn’t in a rush. He wants Trubisky, Rudolph and Pickett to have the freedom to be themselves. So he’s not going to overreact to every throw, no matter how good or bad it might be.

“I think it’s important from a leadership perspective to not overmanage it, to not be too impulsive,” he said.

So he’s not going to be. While there seemed to be a very definitive pecking order during Wednesday’s first practice — Trubisky working with the starters, Rudolph with the backups and Pickett with the third string during a 90-minute workout at St. Vincent College in helmets and shorts — Tomlin just laughed when jokingly asked afterward if he’s ready to announce a starter.

While Tomlin can laugh about the situation, it’s not quite the same for Trubisky, Rudolph or Pickett. All three arrived at training camp in different stages of their career.

For Trubisky, Pittsburgh offers a chance to hit reset five years after Chicago traded up to take him with the second overall pick in the 2017 draft. For Rudolph, the next month or so represents an opportunity to prove he can start — if not in Pittsburgh, then elsewhere. Pickett meanwhile, is trying to play the role of dutiful rookie while simultaneously dealing with the outsized expectations that are part of the deal when you’re a quarterback taken in the first round.

The first day was a mixed bag of sorts. Trubisky missed his first three passes in 11-on-11 but recovered later on. Rudolph started crisply before trailing off. The final pass of Pickett’s first training camp practice as a professional ended with an interception that floated into the hands of rookie undrafted free agent cornerback Carlins Platel, who celebrated by tossing the ball in the air like a clay pigeon and pretending to shoot it down.

Welcome to the NFL kid.

The way Trubisky figures it, every snap is part of the growth process, regardless of how that snap turns out.

Trubisky has the battle scars to prove it. Five years ago, he was where Pickett is now, a first-year quarterback saddled with returning a marquee franchise prominence. Things never really clicked in Chicago. They might in Pittsburgh, though there’s just as good a chance that Trubisky is merely a placeholder until Pickett is deemed ready to take over.

All of which leaves Rudolph in an unenviable spot. The longest-tenured quarterback on the team has a history with offensive coordinator Matt Canada. Yet the team also brought in two high-profile players in the offseason rather than just turn the offense over to him. He’s in the final year of his contract, which also makes his roster spot extremely tenuous. And Rudolph knows it.

“I think you’re always trying to cancel out the outside noise, whether that’s from a coach, that’s from the media or that’s from fans,” Rudolph said. “So I’m going like, I’m going to go out and treat every rep like it’s my last.”

At some point later this summer, it very well may be. At least in Pittsburgh. Yet Rudolph is doing what he can to avoid playing the numbers game in his head. Months of idle chatter are over. One of the NFL’s most intriguing quarterback battles has begun.

“I know all I need is a chance to compete,” Rudolph said. “And that’s what I got to get today, tomorrow and the rest of camp and make the most of it.”

NOTES: Pro Bowl WR Diontae Johnson did not participate in the team portion of practice Wednesday as he tries to work out a new contract. Johnson, who is in the final year of his rookie deal, said wants to remain with the Steelers but added “that’s up to them.” … DE Larry Ogunjobi was limited as he recovers from foot surgery.