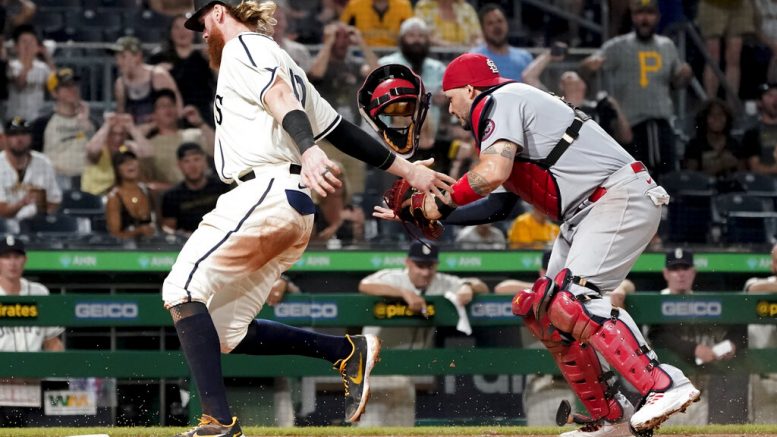 St. Louis Cardinals catcher Yadier Molina, right, loses his mask as he tags Pittsburgh Pirates' Colin Moran who tried to score from second on a hit by Kevin Newman in the eighth inning of a baseball game, Friday, Aug. 27, 2021, in Pittsburgh. (AP)

PITTSBURGH (AP) — By his own admission, J.A. Happ can get inside his head too much sometimes, particularly when the St. Louis Cardinals left-hander faces the same team over and over.

Taking on the Pittsburgh Pirates for the third time in 17 days, the 38-year-old took a deep breath, relaxed and let the guys behind him do most of the hard work.

Tommy Edman hit a two-run homer and drove in three runs, Paul Goldschmidt had three hits and the Cardinals made a handful of spectacular defensive plays to hold on for a 4-3 win on Friday night.

Edman went deep off Dillon Peters (0-2) to finish a three-run outburst in the fifth and the St. Louis bullpen — which imploded on Thursday — kept Happ unbeaten since St. Louis got him from Minnesota at the trade deadline. Alex Reyes overcame a leadoff single by Anthony Alford in the ninth to pick up his 29th save.

Happ (8-6) improved to 3-0 with a 2.22 ERA in five starts with the Cardinals, allowing two runs on three hits in 5 2/3 innings with three walks and four strikeouts.

A perfectly executed pickoff throw by catcher Yadier Molina in the fourth, a diving grab by Edman at second base in the fifth and a strike from center fielder Harrison Bader to throw out Colin Moran at the plate to end the eighth helped the Cardinals bounce back from a miserable 11-7 loss to the Pirates on Thursday.

“I can’t say enough about the defense,” Happ said. “Yadi had that pickoff that was huge today, too. Our outfielders have done a great job. Bader’s out there flying around every night. You try to rely on those guys.”

Pittsburgh has managed five runs in three games this month against the player who was a key addition for the 2015 Pirates team that won 98 games.

Those days are long gone in Pittsburgh. Happ, however, finds himself in the same position now as he was six years ago: trying to keep an NL Central team in the playoff chase.

The Cardinals have plenty of work to do. They entered Friday night five games back in the wild-card race and are getting ready for a bruising stretch that includes series against playoff contenders Milwaukee, Cincinnati (twice) and the Los Angeles Dodgers over the next two weeks.

A day after a four-run seventh-inning lead morphed into a four-run loss, St. Louis rebounded behind Happ and just enough offense (and defense) to prevent another gut-wrenching loss to an also-ran.

“We got punched pretty hard (on Thursday) and we punched right back,” Cardinals manager Mike Shildt said.

Goldschmidt tripled in the first, singled in the fourth and doubled in the fifth. Needing a home run for the cycle, he struck out looking in the seventh.

Peters kept the Cardinals in check until the fifth, when Edmundo Sosa doubled. Bader followed with an RBI double to the gap in right-center and moved to third on a groundout by Happ. Pirates pitching coach Oscar Marin trotted out to the mound to chat with Peters, who has performed well since joining Pittsburgh’s constantly evolving rotation two weeks ago.

Whatever they chatted about didn’t help. Edman sent a 2-1 offering from Peters to the bleachers in left field to make it 3-0.

The Pirates drew closer with one run in both the sixth and the eighth. Moran singled home Michael Chavis in the eighth to make it 4-3 but was nailed at home on a perfect throw by Bader.

Jacob Stallings had three of Pittsburgh’s eight hits but the Pirates left eight runners on base on a night they wore uniforms honoring the Homestead Grays, a Negro League team based in the city’s Homestead neighborhood during the first half of the 20th century.

Cardinals: RHP Dakota Hudson will make his first appearance since undergoing reconstructive elbow surgery last September on Saturday when he pitches for Class A Palm Beach. Hudson is expected to throw around 30 pitches.

Pirates: Catching prospect Henry Davis, the top overall pick in the first-year player draft in June, remains out indefinitely with an oblique strain. General manager Ben Cherington said Davis is “feeling a little bit better every day” but has not been cleared to return to baseball activities. Davis is playing at Class-A Greensboro.

Cardinals: Adam Wainwright (12-7, 3.10 ERA) will look to continue his mastery of the Pirates on Saturday. The 39-year-old is 20-7 against Pittsburgh in his career and threw a two-hit shutout at PNC Park earlier this month.

Pirates: Steven Brault (0-2, 1.93) will look for his first victory in nearly a year on Saturday. The left-hander allowed one run in four innings in a loss to St. Louis last Sunday.