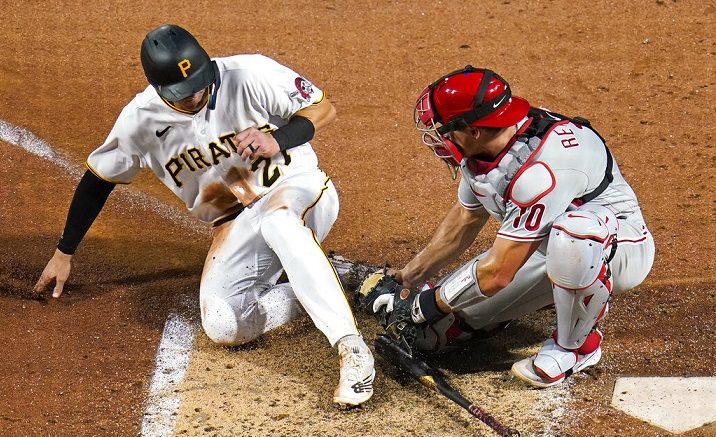 Pittsburgh Pirates' Kevin Newman (27) is tagged out by Philadelphia Phillies catcher J.T. Realmuto while attempting to score from third on a fielder's choice hit into by Ke'Bryan Hayes during the sixth inning of a baseball game in Pittsburgh on Saturday, July 30, 2022. (AP)

PITTSBURGH (AP) — Michael Chavis made the right call. He just didn’t make the right throw. Didi Gregorious and the surging Philadelphia Phillies were only too happy to take advantage.

Gregorious raced home when Chavis’ attempt to cut down Gregorious at third sailed wide of the target, helping the Phillies edge the sliding Pittsburgh Pirates 2-1 on Saturday night.

Philadelphia’s Rhys Hoskins led off the 10th with a sharp grounder to Chavis at first base. Rather than try to beat Hoskins to the bag for an out, Chavis tried to surprise Gregorious he ran from second to third.

The throw handcuffed Pittsburgh third baseman Ke’Bryan Hayes and rolled into foul territory, allowing the sliding Gregorious to pop up and sprint across the plate to lead the Phillies to their fourth straight win.

Chavis put part of the blame on the grip. He essentially threw a two-seam fastball to Hayes, leading it to dip as it neared third.

“I honestly think it was a pretty decent throw until it just bit,” Chavis said. “If I grab a four-seam, this is a whole different conversation. That’s baseball.”

Corey Knebel (3-5) earned the win by working two scoreless innings, his 14th straight scoreless appearance. Knebel began the bottom of the 10th by picking off Pirates rookie Oneil Cruz at second base, then retired the final two batters as Philadelphia matched a season high by moving seven games over .500 (54-47).

“That was all Corey,” Phillies interim manager Rob Thomson said. “He just felt (Cruz) was getting too big a lead and he was probably going to run. It was a pretty good inside move.”

The baserunning mistake marked the second in as many nights for Cruz. The 6-foot-7 shortstop was doubled off of first base in a loss on Friday night when he partially crossed second base and then neglected to touch it while returning to first on a fly out by a teammate.

“These situations, I can’t let them beat me up,” Cruz said. “I’ve just got to grow from them.”

J.T. Realmuto had two of Philadelphia’s six hits, including his 10th home run of the season leading off the sixth.

Pittsburgh’s Cal Mitchell tied the game in the seventh with his fourth home run, turning on a 99 mph fastball from Jose Alvardo and sending it into the right-field seats. Chavis had two singles for the Pirates, who were limited to four hits. Yerry De Los Santos took the loss (0-3).

The Pirates have dropped six consecutive games, all by two runs or less.

Philadelphia’s Ranger Suárez worked six shutout innings as he neared the anniversary of his transition from reliever to starter. Suárez retired the first 11 Pirates he faced and surrendered three singles with a walk and a hit batter while striking out a season-high eight and trimming his ERA to 3.60.

While Suárez largely cruised, Pittsburgh’s Mitch Keller labored everywhere but on the scoreboard.

Keller needed 26 pitches to get through a bases-loaded first-inning jam unscathed and he became more efficient as he went along despite giving up a bevy of hard-hit balls, in part to some heads-up defense.

The game was still scoreless in the sixth when Realmuto sent a 94 mph fastball just over the 21-feet high Clemente Wall to put the Phillies in front. Keller retired the next three batters and exited after allowing one run on five hits, with three walks and three strikeouts to lower his ERA to 4.37, the lowest it has been all season.

“We were definitely battling some traffic without (my) best stuff, so to get out of there with six (innings) and one (run) — it’s a big deal,” Keller said.

Philadelphia optioned infielder Johan Camargo to Triple-A Lehigh Valley after the game. The Phillies made the move after acquiring infielder Edmundo Sosa from St. Louis in exchange for left-handed reliever JoJo Romero.

Phillies: Placed RHP Kyle Gibson on the bereavement list following the death of his grandmother. Gibson will miss his next scheduled start on Tuesday against Milwaukee. Reliever Mark Appel, the top pick in the 2013 draft who finally made his major-league debut in June, was recalled from Triple-A Lehigh Valley. … SS Jean Segura (broken right index finger) was scheduled to play nine innings at second base on both Saturday and Sunday at Lehigh Valley.

Pirates: LHP Chase De Jong (knee) threw a bullpen session on Saturday and will be re-evaluated on Sunday. De Jong went on the 10-day injured list with knee tendonitis on July 17.