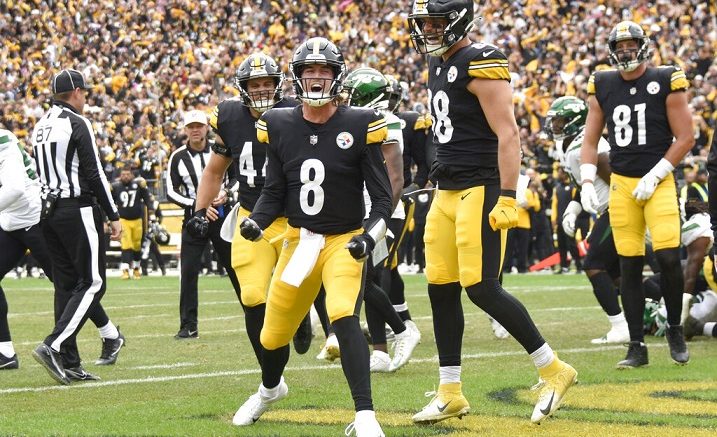 Pittsburgh Steelers quarterback Kenny Pickett (8) celebrates beside teammates after scoring a touchdown against the New York Jets during the second half of an NFL football game Sunday, Oct. 2, 2022, in Pittsburgh. (AP)

“You guys and everyone else think we’re underdogs,” Pickett said. “But we don’t.”

More notable, perhaps, is Von Miller isn’t buying it, either.

Though many familiar faces remain from the Pittsburgh team Miller faced only a year ago in a 27-19 loss while he was with Denver, some significant changes have occurred.

The most notable is at quarterback following Ben Roethlisberger’s retirement, and Pickett getting his chance to show why the Steelers considered the University of Pittsburgh product as the heir-apparent in drafting him at No. 20.

Pickett gets the nod after replacing Mitch Trubisky in the second half of a 24-20 loss to the New York Jets. Though Pickett rushed for two touchdowns to build a 20-10 lead, the 24-year-old also threw three interceptions, the second leading to the Jets scoring the go-ahead points with 16 seconds remaining.

Coach Mike Tomlin saw enough of what he called “spark” from Pickett to make the change.

“We’re full steam ahead,” Tomlin said. “I don’t spend a lot of time pondering decisions not made, and looking in the rearview.”

That might be the best approach, given how the Steelers have dropped three straight since a season-opening 23-20 overtime win against Cincinnati.

The three-game skid and 1-3 start is exactly where Pittsburgh was through its first four games last season, with the lone win coming in the season opener at Buffalo. Tomlin has no interest in drawing comparisons, even positive ones after the Steelers responded to make the playoffs with a 9-7-1 finish.

“I don’t seek comfort in that experience,” Tomlin said. “We’re dealing with our issue here in present day 2022.”

The issues are aplenty, and the Steelers could be 0-4 if not for Evan McPherson’s missed extra-point attempt for Cincinnati with 2 seconds left in regulation.

Pickett’s two TDs are already tied with running back Najee Harris for the team lead. The defense is having difficulty holding second-half leads. And injuries are a factor, with last season’s NFL defensive player of the year T.J. Watt (pectoral) out indefinitely.

The Bills (3-1) have injury concerns of their own, but are suddenly riding high after overcoming a 17-point deficit to pull out a 23-20 win at Baltimore last week.

The victory came on the heels of Buffalo squandering a fourth-quarter lead in a 21-19 loss at Miami, and finally showed the Bills capable of winning in the clutch. Buffalo had lost seven straight games that were decided by a seven points or less.

“I think the character that was shown the last couple of weeks speaks a lot about the guys that we have in this locker room,” quarterback Josh Allen said.

ON THE RECEIVING END

After nearly running out of healthy offensive linemen against Miami, Buffalo was down to three healthy receivers against Baltimore. Isaiah McKenzie landed in the NFL’s concussion protocol, fellow slot receiver Jamison Crowder broke his ankle and Jake Kumerow was sidelined by an ankle injury.

Rookie Khalil Shakir filled in to make his first two career catches, while running back Devin Singletary finished second on the team with 47 yards receiving on four catches.

McKenzie’s status is uncertain for this week. Kumerow is unlikely to play, and Crowder is out.

The Steelers are 0-3 without Watt this season, and 0-7 overall when he misses a game. After creating seven sacks and five turnovers against Cincinnati, Pittsburgh has generated just three sacks and three takeaways.

“We can waste all day sitting around talking about the impact of him not being available,” Tomlin said. “We’d better spend our time talking about the guys that are available to us and how we divide that labor up in the best effort to minimize those opponents that we’re preparing for.”

Pittsburgh’s wide receiver group was supposed to be one of the NFL’s deepest. Things haven’t exactly panned out during the opening month. The Steelers have just two touchdown passes so far and they are the only team in the NFL whose wide receivers have yet to score. Pittsburgh ranks 30th in the league in yards per attempt (6.0).

Rookie George Pickens saw a significant uptick in targets under Pickett in finishing with six receptions for 102 yards. While Pickens is surging, Diontae Johnson and third-year veteran Chase Claypool are sliding. Johnson caught just two passes for 11 yards against New York and had a throw from Trubisky smack off his hands for an interception.

With the Bills’ injury report listing 16 players, coach Sean McDermott said he’s close to running out of bodies to hold a full practice.

“We’re hanging right on the edge,” he said.

Injuries and a short week following a Monday night win over Tennessee led to McDermott cutting back his practice schedule to two days before Buffalo’s loss to Miami in Week 3.