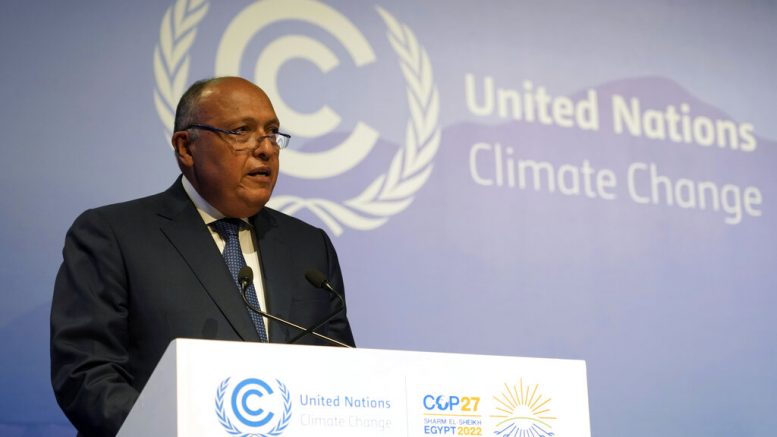 SHARM EL-SHEIKH, Egypt (AP) — Envoys from around the globe gathered Sunday in the Egyptian seaside resort of Sharm el-Sheikh for talks on tackling climate change amid a multitude of competing crises, including the war in Ukraine, high inflation, food shortages and an energy crunch.

Notching up a first small victory, negotiators agreed after two frantic days of preliminary talks to formally discuss the question of vulnerable nations receiving money for the loss and damage they’ve suffered from climate change. The issue has weighed on the talks for years, with rich nations including the United States pushing back against the idea of climate reparations.

“The fact that it has been adopted as an agenda item demonstrates progress and parties taking a mature and constructive attitude towards this,” said the U.N.’s top climate official, Simon Stiell.

“This is a difficult subject area. It’s been floating for thirty plus years,” he said. “I believe it bodes well.”

The decision was also welcomed by civil society groups.

“At long last, providing funding to address losses and damages from climate impacts is on the agenda of the U.N. climate negotiations,” said Ani Dasgupta, president of the World Resources Institute.

But he cautioned that participants “still have a marathon ahead of us before countries iron out a formal decision on this central issue.”

German climate envoy Jennifer Morgan, who led negotiations on the issue together with Chile in the run-up to the talks, said the agreement could help negotiators also make “serious progress” on the issue of reducing emissions.

The outgoing chair of the talks, British official Alok Sharma, said countries had made considerable progress at their last meeting in Glasgow in keeping alive the goal of limiting global warming to 1.5 degrees Celsius (2.7 Fahrenheit) by the end of the century.

Experts say that chances of meeting that target, agreed in the 2015 Paris climate accord, is fast slipping away though. Already, temperatures around the world have increased by about 1.2 C (2.2 F) since pre-industrial times

Sharma warned that other global crises meant international efforts to curb climate change were being “buffeted by global headwinds.”

“As challenging as our current moment is, inaction is myopic and can only defer climate catastrophe,” said Sharma. “We must find the ability to focus on more than one thing at once.”

“How many more wake up calls does the world to world leaders actually need,” he said, citing recent devastating floods in Pakistan and Nigeria, and historic droughts in Europe, the United States and China.

His successor, Egyptian Foreign Minister Sameh Shoukry, said Egypt would “spare no effort” to make the meeting in Sharm el-Sheikh a success and achieve the goals of the Paris accord.

In an opening speech, the chair of the Intergovernmental Panel on Climate Change, Hoesung Lee, said countries have “a once in a generation opportunity to save our planet and our livelihoods.”

Cutting emissions is only part of the task, however. Scientists and campaigners say the world also needs to do more to adapt to those effects of global warming that can’t be avoided anymore.

The head of the U.N. migration agency urged the international community Sunday to mobilize human and financial resources to address growing climate migration.

António Vitorino told The Associated Press that millions of people across the world “are already suffering in their daily lives because of the impacts of natural disasters and climate change.”

“We are running short of time to act,” Vitorino said. “The international community needs to mobilize the expertise, human resources but also the financial resources to come in to support those who are already today seriously impacted by climate change.”

Vitorino, IOM’s director general, said the world needs to double the $100 billion current funding for adaption especially in regions and communities impacted by the fast-changing climate.

“If we don’t focus on solutions for the future,” he said. “We will leave a dramatic humanitarian crisis in the future (that) will eat millions and millions of people in the world,” he said.

More than 40,000 participants have been registered for this year’s talks, reflecting the sense of urgency as major weather events around the world impact many people and cost billions of dollars in repairs. Organizers say about 110 world leaders will attend, many of them speaking at a high-level event on Nov. 7-8, while U.S. President Joe Biden was expected to arrive later in the week.

But many top figures including China’s President Xi Jinping and Prime Minister Narendra Modi of India were not planning to come, casting doubt on whether the talks in Egypt could result in any major deals to cut emissions without two of the world’s biggest polluters.