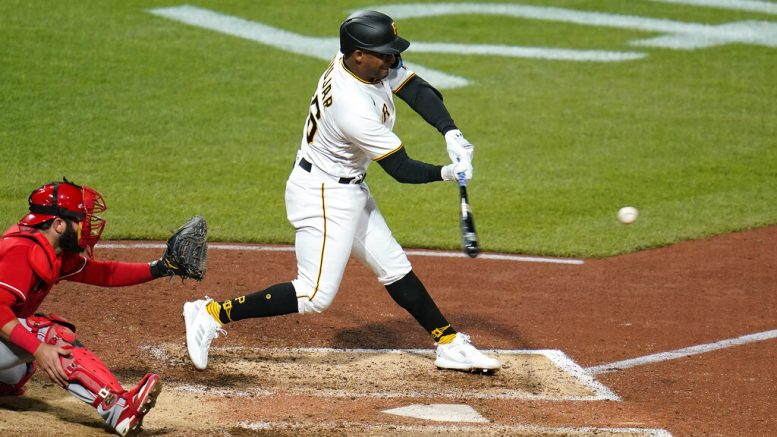 PITTSBURGH (AP) — Miguel Andújar hit a tiebreaking three-run double in the seventh inning, leading the Pittsburgh Pirates to a 4-1 win over the Cincinnati Reds on Tuesday night.

Andújar’s hit snapped a 1-all tie and came in his second game with the Pirates. The designated hitter was claimed off waivers from the New York Yankees on Sunday.

“I’m very happy,” Andújar said. “The guys in dugout were telling me, ‘Welcome to the Pirates.’ I was very happy to come through in that moment for the team. I hit it good. I thought it was going out (of the park).”

The Pirates loaded the bases with one out on a single by Oneil Cruz and walks to Bryan Reynolds and Jack Suwinski by Buck Farmer (2-2). Andújar then hit a long drive off the top of the bullpen door in left-center field, clearing the bases.

It marked Andújar’s first three-RBI game since Sept. 27, 2018, with the Yankees against the Tampa Bay Rays. He finished second in the American League Rookie of the Year balloting that season behind the Los Angeles Angels’ Shohei Ohtani.

Though he left the Yankees, who clinched the AL East title Tuesday night, Andujar is happy to be in Pittsburgh.

“We’ve got a group of guys here with a lot of talent,” Andújar said. “I’m super excited to be with this team. I’m going to get more opportunities here.”

Wil Crowe (6-10) pitched two scoreless innings of relief. All-Star David Bednar worked the ninth for his 18th save in 22 chances, the first since July 23 after being sidelined nearly two months by a lower-back strain.

“His stuff played, and I thought the ball came out of his hand well,” Pirates manager Derek Shelton said of Bednar. “He’s getting back to moving down the mound the way we saw him before the injury, which is very encouraging.”

The Pirates won for the third time in four games since an eight-game losing streak. The Reds have lost five of six and 15 of 19, and still hold a two-game edge over Pittsburgh for fourth place in the five-team NL Central.

Cincinnati starter Hunter Greene allowed one unearned run in six innings while striking out 10. The rookie right-hander yielded four hits and three walks. Greene is 0-1 with a 1.06 ERA in three starts since missing six weeks with right shoulder inflammation.

Greene credits the presence of veteran catcher Austin Romine for his good stretch.

“He takes a lot of the thinking away, especially for someone like me who doesn’t have a lot of experience up here,” Greene said. “I think in the past, I put a lot of that pressure on myself.”

Pirates starter Mitch Keller gave up one run on five hits in five innings while striking out five and walking three. He has allowed three earned runs or less in 18 of his last 21 starts. The Pirates have scored one run while he has been in the game during each of his last three starts.

Cruz and fellow rookie Ji-hwan Bae had two hits apiece for the Pirates.

The Reds got two hits each from Kyle Farmer and Mike Siani.

Cincinnati opened the scoring in the first inning when Jonathan India scored on Keller’s wild pitch.

The Pirates tied it in the third, scoring a run when Reynolds grounded into a double play.

Reds: Siani, a rookie center fielder, left the game in the eighth inning when he was shaken up while attempting a diving catch. Siani hit his head on the ground but passed concussion tests. … INF Donovan Solano missed his fifth straight game because of an eye infection.