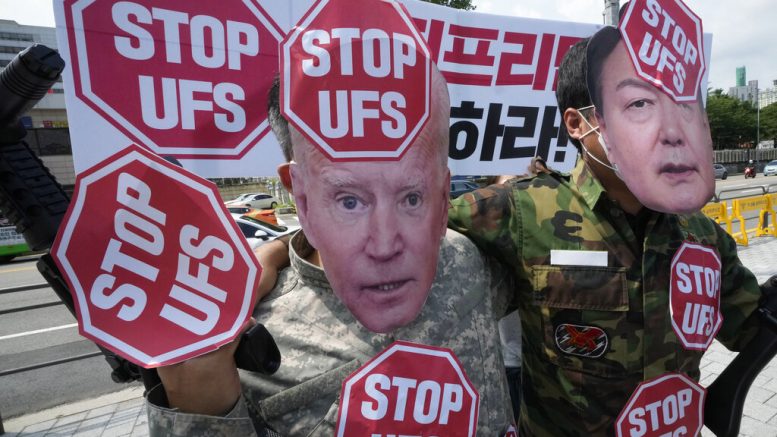 SEOUL, South Korea (AP) — The United States and South Korea will begin their biggest combined military training in years next week in the face of an increasingly aggressive North Korea, which has been ramping up weapons tests and threats of nuclear conflict against Seoul and Washington, the South Korean military said Tuesday.

The allies’ summertime drills, named Ulchi Freedom Shield, will take place from Aug. 22 to Sept. 1 in South Korea and include field exercises involving aircraft, warships, tanks and potentially tens of thousands of troops.

The drills underscore Washington and Seoul’s commitment to restore large-scale training after they canceled some of their regular drills and downsized others to computer simulations in recent years to create space for diplomacy with North Korea and because of COVID-19 concerns.

The U.S. Department of Defense also said the U.S., South Korean and Japanese navies took part in missile warning and ballistic missile search and tracking exercises off the coast of Hawaii from Aug. 8 to 14, which it said were aimed at furthering three-way cooperation in the face of North Korean challenges.

While the United States and South Korea describe their exercises as defensive, Ulchi Freedom Shield will almost surely draw an angry reaction from North Korea, which describes all allied training as invasion rehearsals and has used them to justify its nuclear weapons and missiles development.

China, North Korea’s main ally, expressed concern over the expansion of U.S. military exercises with its Asian allies, saying they could worsen tensions with the North. Chinese Foreign Ministry spokesperson Wang Wenbin didn’t offer a specific answer when asked whether Beijing believes the trilateral drills in Hawaii were in some way directed at China.

“North Korea has repeatedly expressed its concern” over the joint drills, Wang said in a briefing in Beijing on Tuesday.

“The negative impact of the military exercises on the situation on the Korean Peninsula is worth paying attention to. All parties should act prudently and stop any actions that may increase tension and confrontation and damage the mutual trust,” he said.

Before being shelved or downsized, the U.S. and South Korea held major joint exercises every spring and summer in South Korea. The spring ones had been highlighted by live-fire drills involving a broad range of land, air and sea assets and usually involved around 10,000 American and 200,000 Korean troops.

Tens of thousands of allied troops participated in the summertime drills, which mainly consisted of computer simulations to hone joint decision making and planning, although South Korea’s military has emphasized the revival of large-scale field training this time.

Officials at Seoul’s Defense Ministry and its Joint Chiefs of Staff did not comment on the number of U.S. and South Korean troops that will participate in Ulchi Freedom Shield.

The drills, which will kick off along with a four-day South Korean civil defense training program led by government employees, will reportedly include exercises simulating joint attacks, front-line reinforcements of arms and fuel, and removals of weapons of mass destruction.

The allies will also train for drone attacks and other new developments in warfare shown during Russia’s war on Ukraine and practice joint military-civilian responses to attacks on seaports, airports and major industrial facilities such as semiconductor factories.

“The biggest meaning of (Ulchi Freedom Shield) is that it normalizes the South Korea-U.S. combined exercises and field training, (contributing) to the rebuilding of the South Korea-U.S. alliance and the combined defense posture,” Moon Hong-sik, a Defense Ministry spokesperson, said during a briefing.

Some experts say North Korea may use the drills as an excuse to increase tensions.

North Korea has already warned of “deadly” retaliation against South Korea over its own COVID-19 outbreak, which it dubiously claims was caused by anti-North Korean propaganda leaflets and other objects flown across the border by balloons launched by southern activists. There are concerns that the North Korean threat, issued last week by the powerful sister of leader Kim Jong Un, portends a provocation which might include a nuclear or missile test or even border skirmishes.

Animosity has increased on the Korean Peninsula since U.S.-North Korea nuclear negotiations derailed in early 2019 because of differences over a relaxation of crippling U.S.-led sanctions on North Korea in exchange for disarmament steps.

Kim Jong Un has since declared North Korea will bolster its nuclear deterrent in the face of “gangster-like” U.S. pressure and halted all cooperation with South Korea. Exploiting a division in the U.N. Security Council over Russia’s war on Ukraine, North Korea has dialed up its weapons testing to a record pace this year, conducting more than 30 ballistic launches. They included the country’s first intercontinental ballistic missiles since 2017 and tests of tactical systems designed to be armed with small battlefield nuclear weapons.

Kim has punctuated the testing binge with repeated warnings that North Korea will proactively use its nuclear weapons in conflicts with South Korea and the United States, which experts say indicate an escalation in its nuclear doctrine that could cause greater concern for its neighbors.

South Korea and U.S. officials say North Korea has been gearing up for its first nuclear test since September 2017, when it claimed to have developed a thermonuclear warhead to fit on its ICBMs.