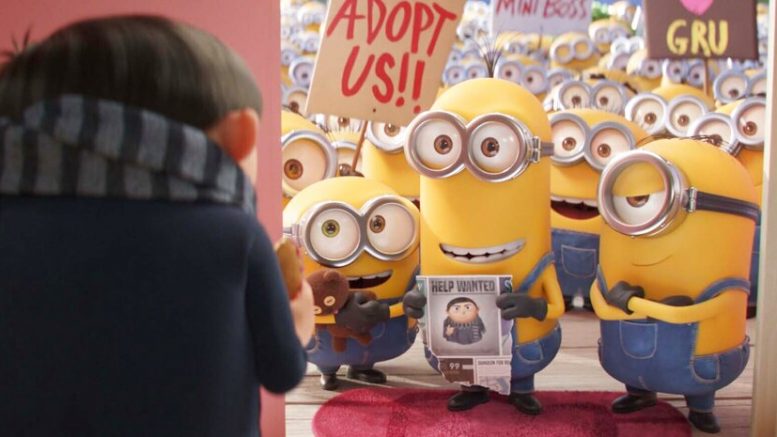 This image released by Universal Pictures shows characters, from left, Gru, voiced by Steve Carell, Bob, Kevin and Stuart in a scene from "Minions: The Rise of Gru." (Illumination Entertainment/Universal Pictures via AP)

For a not small segment of the audience for “Minions: Rise of Gru,” only one thing really needs to be said. The Minions are in it. That’s enough.

Now five films and 12 years into the “Despicable Me” series, the appeal of the bug-eyed, overalls-wearing, banana-yellow henchmen horde is overwhelming apparent. They have swarmed the planet like that human mob in “World War Z,” spreading a happy cartoon plague that long ago became endemic. The Minions are one of the great second-banana success stories.

And the franchise’s latest installment, “Minions: Rise of Gru,” is smart enough not to reinvent the wheel — even if trying to do so might sound like the kind of job the Minions would love to get a crack at. The outline of the film is a sequel to 2015 “Minions” and “Despicable Me” prequel for Gru (Steve Carell), who here is an 11 3/4-year-old aspiring supervillain. But the coming of age belongs less to Gru than his little army of sidekicks who once again steal the show as they establish their undying allegiance to “Mini Boss.”

The perfunctory storyline centers on Gru reaching for his diabolical dreams, and proving his mettle to an evildoer group called the Vicious 6. We’re in 1976 California. The Vicious 6 has jettisoned its founder, an aged nunchuck-wielding criminal named Wild Knuckles (Alan Arkin, a voice so distinctive that it pierces even something this cartoonish). Its new leader, the disco-styled Belle Bottom (Taraji P. Henson), takes possession of a powerful amulet and then holds auditions for new members in the Vicious 6’s San Francisco secret lair beneath a music store called Criminal Records. With hair neatly combed, Gru shows up seeking his big break only to be immediately dismissed as a mere child. In the fallout, Gru and the Minions sneak off with the amulet.

I’m sure you’re just dying to know the fate of that amulet. Thankfully, “Rise of Gru” knows that its MacGuffins are nothing but Minion fodder. More than any previous film, this one feels engineered to enable as much slapstick hijinks for the yellow ones as possible. The plot is mostly just a mechanism for Minion mayhem, allowing them the opportunity to pilot an airliner, learn kung fu from an acupuncturist (Michelle Yeoh) and repeatedly pronounce “San Francisco.”

It’s not a recipe for the greatest movie ever, necessarily, but a far worse sin, in this world of Minion domination, would be to skimp on screen time for the little guys. “Rise of Gru,” directed by franchise veteran Kyle Balda, supplies a brisk and breezy 88-minute Minion morsel to keep the pipsqueak masses sated before the next “Despicable Me” movie. After singling out the trio of Kevin, Stuart and Bob (all voiced by Pierre Coffin), the plump and talkative Otto gets introduced this time.

Along the way, there are plenty of ‘70s needle drops, from the Ramones to Sly and the Family Stone, and even a Linda Ronstadt reference. There’s plenty of affectionate period detail, too, including a Tupperware party and a trip to the movies to see “Jaws.” (The Minions laugh their heads off.) “Rise of Gru” likewise at moments adopts a Blaxploitation vibe or a James Bond opening credit sequence.

If anything, the Minion craze has proven the timeless versatility of the googly-eyed henchmen — a cartoon concoction of childlike slapstick simplicity and eminent pliability. It’s enough to make you curious to imagine the Minions in subsequent decades — on Wall Street in the ’80s, maybe, or head banging at a Nirvana concert in 1990s Seattle.

“Minions: Rise of Gru,” a Universal Pictures release, is rated PG by the Motion Picture Association of America for some action/violence and rude humor. Running time: 88 minutes. Two and a half stars out of four.