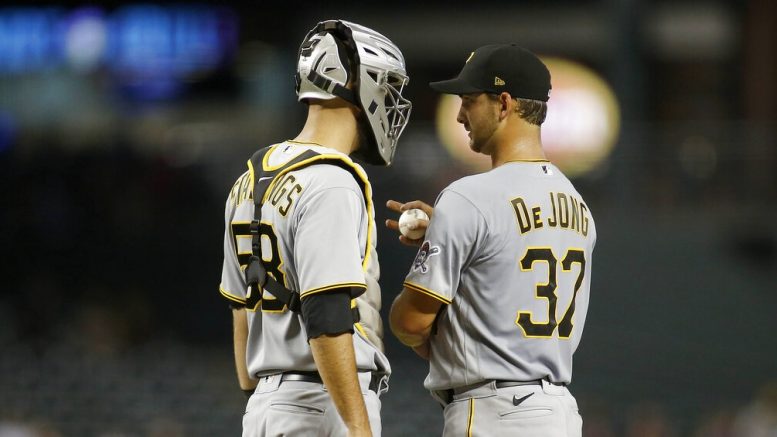 It was a nice bounce-back outing for Smith (3-6), who was rocked for nine earned runs in one inning during a 22-1 loss to the Los Angeles Dodgers just before the All-Star break. The left-hander even earned his first career stolen base, surprising the Pirates by getting a huge jump and swiping second.

D-backs manager Torey Lovullo was more impressed with Smith’s performance on the mound, which was the fourth straight good outing for the team’s starting pitchers. It’s been a rare good sign for a team that has the worst record in the majors at 28-68.

Smith gave up two runs on six hits and two walks while striking out seven. Joakim Soria allowed two baserunners but pitched a scoreless ninth for his fifth save.

Escobar — who was the D-backs’ only All-Star representative last week — continued his solid season by ripping a low liner over the right-field wall for his 22nd homer to make it 4-0. The 32-year-old will be a tempting addition for a playoff-contending team as MLB’s trade deadline approaches. He’s in the final year of his contract, plays multiple positions, and is a switch hitter.

Arizona’s David Peralta added a double and triple. Escobar’s homer and Peralta’s extra-base hits came after the two had a heated argument following the third inning. Peralta said the argument wasn’t a big deal and a simple misunderstanding.

Chase De Jong (1-4) took the loss for the Pirates, giving up four runs over five innings. He walked two and gave up seven hits, including three homers.

“When you go down and into Escobar, you’re going to pay for it,” Shelton said.

The Pirates pulled within 4-2 in the seventh after Ke’Bryan Hayes and Bryan Reynolds hit back-to-back RBI singles. Joe Mantiply struck out All-Star Adam Frazier with the bases loaded to end the rally.

Pavin Smith and Josh VanMeter hit back-to-back solo homers in the second that nearly landed in an identical spot behind the right-center field wall, pushing the D-backs to a 2-0 lead. It was Smith’s eighth homer of the year and VanMeter’s third.

De Jong made an excellent play in the third when he took a hard-hit grounder off the inside of his left knee from David Peralta. The pitcher recovered, chasing after the ball along the first-base line, picking it up and flipping to first baseman John Nogowski for the out.

Shelton said De Jong’s knee was bruised and swollen after the third but he wanted to keep pitching.

“I give him credit for grinding through,” Shelton said. “Our bullpen was a little strapped.”

The Pirates acquired LHP Dillon Peters from the Los Angeles Angels in exchange for cash considerations. Pittsburgh sent him to Triple-A Indianapolis.

RHP Kyle Crick was designated for assignment to make room for Peters on the 40-man roster.

The Pirates will send LHP Tyler Anderson (5-8, 4.35) to the mound for the second game of the three-game series on Tuesday. The Diamondbacks will counter with RHP Taylor Widener (1-0, 2.54).