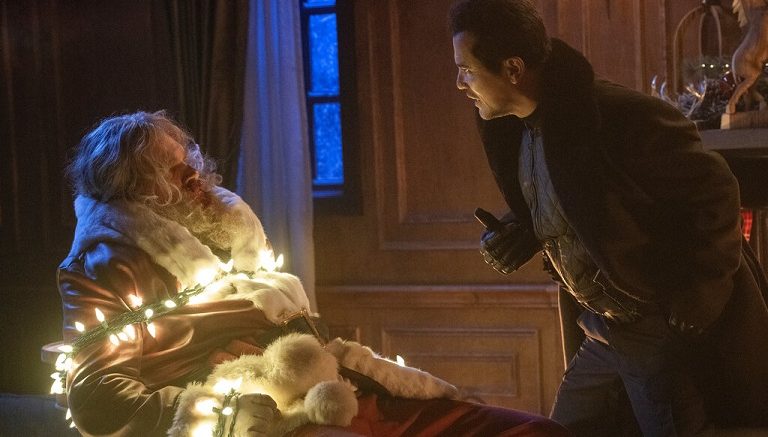 The holiday season is upon us and how better to celebrate than watching Santa slip several pool balls into a Christmas stocking, swing them in the air menacingly and see him cave in someone’s face?

Such is “Violent Night,” a film that clearly no one wanted but somehow nicely acts as a chaser to all the sticky sentimentality this time of year. It is billed as an “alt-Christmas action-comedy” and it may be a litmus test of who is your real tribe: If you think watching Santa try to strangle a guy with Christmas lights is funny, this is the film for you.

Directed by Tommy Wirkola, “Violent Night” has taken the season’s naughty or nice dichotomy deeply to heart, offering pounds of gore and wounds that spurt mini-fountains of blood along with tooth-aching sweetness about believing in Santa and the true meaning of Christmas.

It’s easy to initially dismiss it as an “SNL” digital short that got high on its own tinsel but there is a sort of perverse glee to seeing Santa suck on the tip of a candy cane until it is a sharp shard and then plunge it into a bad guy’s neck. Isn’t it time for Kris Kringle as a sociopath?

Few people can balance all these demands as Santa except David Harbour, who specializing in gruff-on-the-outside, sweet-on-the-inside teddy bears. This time, his beard soaked in blood, he must save an ultra-rich family from a murderous group of home invaders with automatic weapons and military training.

On his side: “Christmas magic,” which he reveals multiple times he does not understand and which allows the screenwriters — Pat Casey and Josh Miller — a yuletide-sized logical loophole. They’ve even given Santa an origin story as a centuries-old Viking raider with a fondness for crushing skulls with a hammer. He’d be on the naughty list, naturally.

We initially meet Santa in the present day at an English pub. It’s Christmas Eve and he’s hammered. There are other men dressed as Santas this night, but they’re just pretenders, like “Bad Santa.” He’s the real thing.

Tonight, Santa is worn-out and fed-up. The children these days just demand more and more presents — just grubby consumers. He even calls them junkies. “I forgot why I started doing it in the first place,” he says. “Maybe this is my last year.”

During his rounds, he happens to linger too long at the Lightstone family compound in Connecticut. A ruthless gang has just stormed inside hoping to relieve the family of $300 million and trapping Santa with just his magic bag of presents and a pent-up desire to hurt people.

John Leguizamo, so often the comedy relief in films, here is as heavy as it gets, an anti-Christmas madman who tortures with a nutcracker and gets some of the best over-the-top lines like “Christmas dies tonight” and “Time to kill Santa.” The film soon moves into “Die Hard” territory as terrorists play cat-and-mouse with a good guy inside the building.

Santa connects with one of the hostages — a little girl (Leah Brady, sparkling like an ornament) — who still believes in Santa. “You are more than the presents you bring,” she tells him. And so he proves that Christmas is indeed alive by systematically murdering every single bad guy and girl with a sledgehammer, aided by his new friend’s “Home Alone” boobytrapping skills and all to a soundtrack of Christmas songs by Burl Ives, Bryan Adams and Slade.

This is not a Norman Rockwell vision of Santa, of course. He has a torso full of tattoos and sutures his own wounds with Christmas tree ornament hooks. He vomits, impales baddies in spiky Christmas decorations and uses the sharp parts of a pair of ice skates with surgical precision. Few films have earned their R rating better. All that’s missing is you as long as you think it’s time to add a little blood to Christmas?

“Violent Night,” a Universal Pictures release that opens nationwide in theaters Friday, is rated R for “strong bloody violence, language throughout and some sexual references.” Running time: 112 minutes. Two and a half stars out of four.