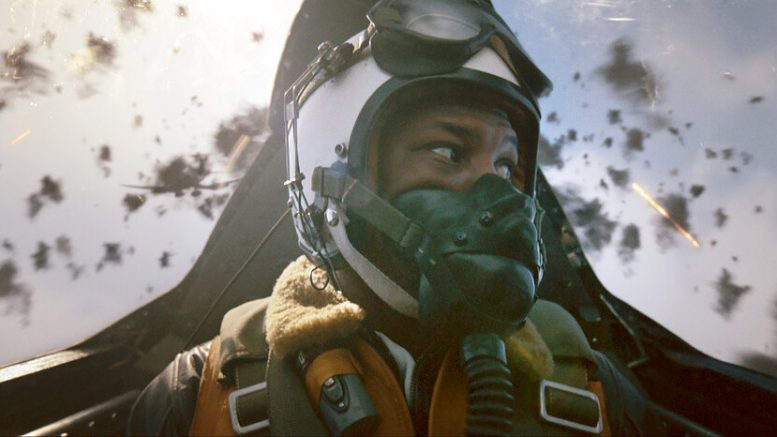 This image released by Sony Pictures shows Jonathan Majors in a scene from "Devotion." (Columbia Pictures-Sony via AP)

There must be something about actor Glen Powell that casting directors associate with the heavens.

He’s played astronaut John Glenn in “Hidden Figures,” voiced a NASA official in the animated film “Apollo 10 1⁄2” and has two roles this year as a hotshot Navy aviator.

Here he is in “Devotion,” kicking off the movie with an entrance that’s pure cocksure, smirking golden boy, a replay of his earlier role as Jake “Hangman” Seresin in “Top Gun: Maverick.”

But this time the year is 1950, and Powell’s swaggering Lt. Tom Hudner is not the hero. The real star of “Devotion” is Ensign Jesse Brown, the first African American to complete Navy flight training. He’s played superbly and deeply by Jonathan Majors. So why is Powell so front and center?

The film is perhaps not what you were expecting. It is not an action thrill ride, a “Top Gun” set in Korea. There is no “Highway to the Danger Zone.” It is, rather, a quiet portrait of an airman over the course of a year, and, to be honest, it’s really not so much about him as about the notion of allyship.

Based on the book by the same name by Adam Makos, “Devotion” is assuredly directed by J.D. Dillard, who skillfully mixes shots in tight quarters with excellent aerial combat sequences. The script by Jake Crane and Jonathan A. H. Stewart is a slow-burning affair that will have audiences tugging at the leash.

It’s not a typical biopic with lots of flashbacks. In fact, there are none. We meet a gruff Brown after he has endured all manner of racism — hazed, bullied and forced to repeat Navy tests multiple times. His commanding officer refused to pin his lapel wings at graduation. Such experiences he reveals in off-hand comments. He has written every slur and demeaning putdown he has been told and repeats them in a mirror for motivation.

Once Brown returns nightly to his wife and baby daughter, the grimness dissolves. In the domestic sphere, he is a dotting father and loving husband. The bond he shares with wife, Daisy (better than wonderful Christina Jackson), is the rock hard earth that allows him to soar. “Play nice,” his wife tells him.

The rest of the cast includes a nifty but small part for Joe Jonas, showing lots of charismatic promise, and Thomas Sadoski as the aviator’s commanding officer. He plays it like a cool assistant professor at night school who is likely to turn his seat backward during a lecture to “rap with the kids.”

A tentative friendship blooms between Brown and Hudner, who sees in the Black airman a striving pilot and an admirable man. Both long for combat, having learned to fly in the years after World War II just as the Korean conflict is heating up. They both learn to wrestle with the Vought F4U-4 Corsair, a temperamental fighter aircraft.

Hudner’s fondness for Brown has a condescending flavor, though he wouldn’t admit it. The white pilot is always ready to jump to his Black friend’s defense, be it a stare-down with intolerant U.S. soldiers or fussy French waiters. He’s the first to throw a punch, even when Brown wasn’t looking for violence. “I can fight my own fights. Been doing it for a long time,” Brown tells his wingman.

And that’s when the film gets interesting (although things get a little surreal when their carrier docks in Cannes and the aviators somehow meet up with Elizabeth Taylor.) This lesson of how to be an ally for diversity comes into sharper focus as the film progresses. It is Hudner who needs to evolve his thinking. It is why Hudner is so prominent in a film about a Black pioneer.

When a group of Black sailors — who have come out on deck to cheer Brown land his plane on the carrier — approach him with a Rolex gift to say how proud he makes them, one says: “We see you.” But Hudner also needs to see him. Not through white savior lenses but as a man. “It was never your job to save Jesse,” Brown’s wife tells him.

But, ultimately, this is a weird way to honor a man who would posthumously receive the Distinguished Flying Cross, the Air Medal and the Purple Heart. In many ways, framing his heroics beside a white wingman undermines the singularity of Brown. Even the film’s poster — with both actors’ pictures equally large — gives a false equivalency. This hero didn’t need any help.