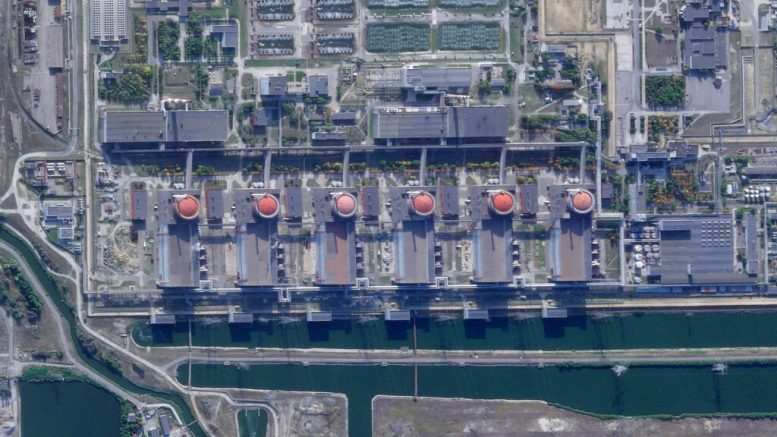 KYIV, Ukraine (AP) — Russia resumed shelling in the vicinity of Ukraine’s Zaporizhzhia nuclear power plant, a local official said Wednesday, a day after the U.N. atomic watchdog agency pressed for the warring sides to carve out a safe zone there to protect against a possible catastrophe.

The city of Nikopol, located on the opposite bank of the Dnieper River from Europe’s largest nuclear power plant, was fired on with rockets and heavy artillery, regional governor Valentyn Reznichenko said.

The reports of nearby shelling, which couldn’t be independently verified, have caused international alarm. The head of the International Atomic Energy Agency, Rafael Grossi, warned the U.N. Security Council on Tuesday that “something very, very catastrophic could take place” at Zaporizhzhia.

“There are fires, blackouts and other things at the (plant) that force us to prepare the local population for the consequences of the nuclear danger,” Reznichenko said.

The potential peril led the U.N. atomic watchdog agency to urge Russia and Ukraine to establish a “nuclear safety and security protection zone” around the plant.

There are fears the fighting could trigger a catastrophe on the scale of the Chernobyl disaster in 1986. The plant was built during the Soviet era and is one of the 10 biggest in the world.

Neither Moscow nor Kiev officials would immediately commit to the idea of a safety zone, saying more details of the proposal were needed.

The plant is currently generating electricity only to power its safety systems, a senior Ukrainian official said.

Any further disruption could force the plant to use a back-up diesel generator, but that would entail bringing four diesel transport trucks a day through the fighting, said Oleh Korikov, acting Chief State Inspector for the Nuclear and Radiation Safety of Ukraine.

“We could potentially be in a situation where we run out of diesel,” he said. “And this can lead to an accident with damage to the active zone of the reactors, and, accordingly, the release of radioactive products into the environment.”

Authorities could consider shutting down the plant, he said, without offering details about how that would work.

Russian President Vladimir Putin defied pressure to halt the war, saying Wednesday that Moscow will forge ahead with its military offensive in Ukraine until it achieves its goals. He also mocked Western attempts to stop Russia with sanctions.

The eastern city of Sloviansk came under Russian fire on Wednesday morning, damaging a school and another building, according to the head of the city administration Vadym Lyakh.

Firefighters in the city dug deep into the still-smoldering rubble of an apartment building and removed at least one body bag.

Chunks of bricks, masonry and concrete lay among the torn branches of nearby trees, mixed with broken glass and roof tiles. Metal doors, buckled by the force of the blast, hung off their hinges.

The strike came at around 4 a.m., said local resident Raisa Smelkova, 75, who lives in another part of the building. She and her husband were unhurt.

Smelkova and her husband lived through the previous war in Ukraine in 2014, when Russia annexed the Crimea region. But this time, she said, things are much worse.

“What is happening now is not just scary, it’s gruesome,” she said. “There is more destruction. Everything is worse. Just everything.”

Three civilians were killed in Russian shelling in the Donetsk region, the Ukrainian presidential office said. Kharkiv city was hit by rockets twice during the night.

But Ukrainian forces have taken control of an unspecified number of towns in the Kherson region, according to Nataliya Humenyuk, a spokesperson for the southern military command. She said details would come later from the military leadership.

The U.K. defense ministry said there had been heavy fighting on three fronts: in the north, near Kharkiv; in the east in the Donbas; and in the south in Kherson Oblast.

Amid a Ukrainian counterattack in the east, “multiple concurrent threats spread across 500 kilometers (310 miles) will test Russia’s ability to coordinate operational design and reallocate resources across multiple groupings of forces,” the ministry said Wednesday.

The Russian military held large-scale military drills that began last week and ended Wednesday in the country’s east that involved forces from China. It was seen as another show of increasingly close ties between Moscow and Beijing amid tensions with the West over the military action in Ukraine.

Gino recently came to us as a stray so we are still getting to know him. Here at the shelter, Gino is calm, very sweet…

(Family Features) Creating traditions is a festive focal point for many families throughout the holiday season, and a timeless way to bring your nearest and…

PITTSBURGH (AP) — There was no doubt in Zach Wilson’s mind. None. And the second-year New York Jets quarterback had no interest in keeping his…

The Associated Press Moviegoing audiences chose the horror movie over the romantic comedy to kick off the month of October. Paramount’s “ Smile ” topped the North…

By HELEN FIELDING Staff writer A saying goes that little by little, one goes a long way. That is Amber McMillen’s goal in raising childhood…

FORT MYERS, Fla. (AP) — Dozens of Florida residents left their flooded and splintered homes by boat and by air on Saturday as rescuers continued…

ST. LOUIS (AP) — Albert Pujols hit a two-run single and Corey Dickerson had a grand slam in a six-run first inning to help the…

From staff reports The bridge over Halls Run Creek on Meadow Church Road in Cranberry Township has been closed because the bridge superstructure has deficiencies,…

From staff reports Oil City water crews will flush fire hydrants in the city from 10 p.m. to 6 a.m. Sunday through Thursday The areas…

Clover has been in a foster home with his siblings all summer and is ready to find a home of his own! His foster mom…

By KAYLA HANNA Student contributor Cranberry High School staff and students have recently started making headway on constructing an outdoor classroom, which will sit behind…

From staff reports A Strattanville man is facing charges for assaulting a woman Wednesday night at an Elk Street residence in Franklin. Franklin police said…

From staff reports The winners of the 2022 Oil Region tourism awards have been chosen. Nearly 500 voters selected their favorites from more than 50…

The Associated Press The nostalgia for “Hocus Pocus” has always been a bit of a mystery to me. There is nothing new about kids loving…

Sorrel is a laid back guy who mostly keeps to himself, but he loves to play and run around when he’s in the right mood….