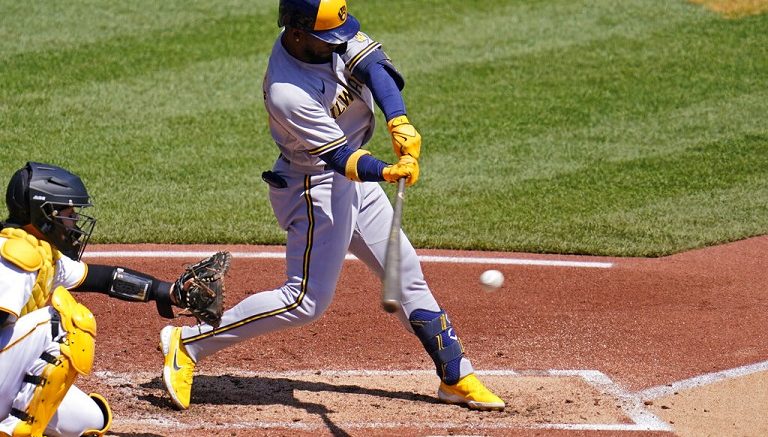 PITTSBURGH (AP) — The nostalgia factor has worn off for Andrew McCutchen. Four-plus years removed from his departure from Pittsburgh, the five-time All-Star admits returning to PNC Park to play in a visiting uniform doesn’t quite tug at the heartstrings the way it used to.

He’s moved on. Three times in fact. Now a designated hitter for the Milwaukee Brewers, playing in Pittsburgh these days simply means the chance to crash at the house his family still keeps in the city.

That doesn’t mean McCutchen wasn’t keenly aware of the fact he has struggled against his old club since being traded to San Francisco in January 2018. And why it felt so good to power the Brewers to a 3-2 victory on Thursday to complete a three-game sweep.

McCutchen led off the game with his 93rd home run in Pittsburgh — and first without the familiar ‘P’ on his cap — and added a go-ahead two-run single in the ninth as Milwaukee won its eighth straight over the Pirates dating to last season.

“This is probably the first time I’ve done well against the Pirates, not just here but against them in general,” said the 2013 National League MVP, who came in hitting just .136 in 17 career games against Pittsburgh. “It was a good game to show up. A good day to sleep in my own bed and to be able to get that ‘W.’”

Christian Yelich started the Brewers’ rally with a one-out, pinch-hit bunt single against closer Chris Stratton (0-1). Kolten Wong and Omar Narvaez followed with singles to load the bases for McCutchen. The 35-year-old’s liner seemed to graze the outstretched glove of second baseman Josh VanMeter before rolling into right field, allowing Yelich and Wong to score.

McCutchen attributed the last of his three hits to figuring out home plate umpire Vic Carapazza’s strike zone. When Stratton’s first pitch — a breaking ball below the knees — was called a strike, McCutchen figured Stratton would try for the same spot. When Stratton obliged, McCutchen was ready.

“I did what I needed to do and got the ball out there to the outfield,” he said.

Hoby Milner (2-0) worked a perfect eighth to pick up the win. Devin Williams retired the Pirates in order in the ninth for his first save.

Pittsburgh rookie right fielder Jack Suwinski collected the first RBI of his career with an infield single in the seventh and Ben Gamel followed with a sacrifice fly off reliever Brad Boxberger as the Pirates turned a 1-0 deficit into a 2-1 lead.

David Bednar worked a scoreless eighth for the Pirates to set the stage for Stratton, in his first full season at the back end of Pittsburgh’s bullpen. He quickly put away Lorenzo Cain before Yelich’s bunt started Milwaukee’s surge.

Pirates starter Jose Quintana surrendered a home run to McCutchen on the game’s first pitch but quickly settled down. Quintana, hoping to revive his career in Pittsburgh, allowed just four hits and struck out nine without issuing a walk.

The Pirates have yet to have a starting pitcher record a victory through 19 games, the second-longest streak to start a season in major league history, trailing only the 1988 Baltimore Orioles, who started the season 0-21. Quintana remains winless since Sept. 5, 2019, while pitching for the Chicago Cubs.

Milwaukee starter Freddy Peralta tossed six shutout innings, allowing just three hits and striking out seven without issuing a walk. Peralta’s only trouble spot came in his last inning when consecutive singles by Daniel Vogelbach and Bryan Reynolds put two on with two outs. A nine-pitch battle with Pittsburgh’s Ke’Bryan Hayes followed, with Peralta ultimately getting Hayes to fly out to right field to end the threat.

Boxberger, one of five Brewers pitchers who combined for a one-hitter in a victory on Wednesday night, wasn’t quite as sharp less than 24 hours later but was bailed out by McCutchen.

Pirates: C Andrew Knapp was scratched from the lineup about an hour before the first pitch due to an illness, forcing Roberto Perez to make the start after expecting to have the day off.